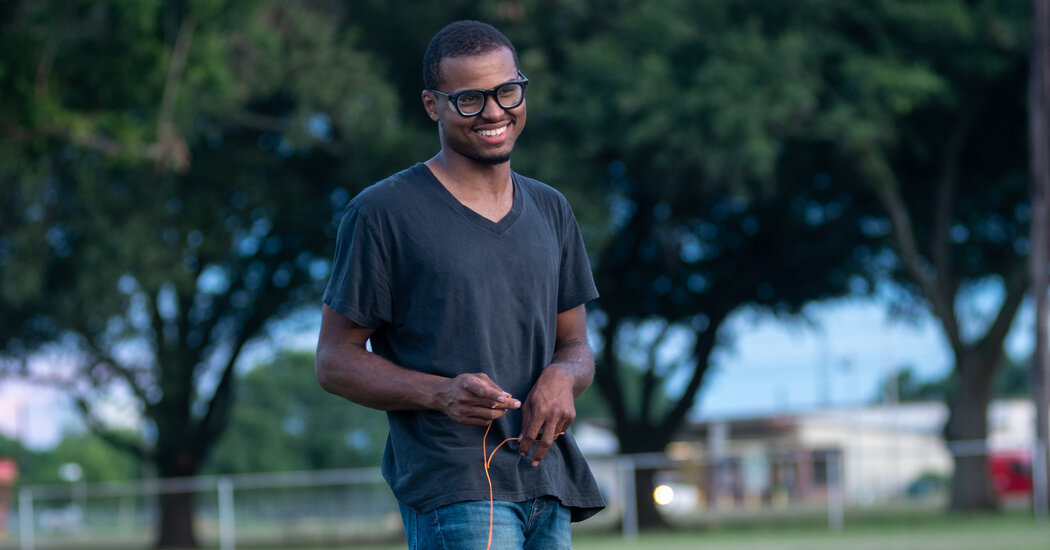 GREENWOOD, Mississippi — On Saturday night, June 18, Memphis-based entertainer Desmond Lewis was in a public park unloading cakes — bundles of fireworks connected by a high-speed fuse — from a pickup truck. On the other side of a nearby line of trees were about 150 waiting spectators for the June 19 celebration in the city which is billed as ‘the cotton capital of the world’.

“The first rule of fireworks,” Lewis said as he stood above a large box of explosives in the lingering heat, “is don’t put any part of the body on the explosive that you don’t want to lose.”

Lewis, 28, is tall and wears glasses. He wears a pair of dark-rimmed safety glasses because, as he says, “I’m always doing stuff.” He pulled a good-humored face as he carried the box to his chest.

Primarily a sculptor, Lewis creates works that are forged, carved, fabricated and cast from industrial materials. His objects combine concrete with steel, wood and rebar. A pocked and ridged concrete block anchors a steel construction in “Bout that split tho” (2021), for example. In another, the sculpture “America’s Forgotten” (2017) stands 16 feet tall on the campus of the University of Memphis, where Lewis earned his MFA. It features a vertical cylinder of concrete adorned with large pieces of steel in the shape of the broken links of a chain.

In his works, Lewis recognizes an analog: for him, their smooth surfaces are a reminder of how the complex national narratives that surround African American work histories are dismissed, concealed, or whitewashed. Many builds feature refined concrete, he says, “massaged to look immaculate” – an impulse he rails against. His sculptures seem mutilated or on the verge of ruin. They expose their own innards in a way that Lewis understands as representative of the inextricable fiction of white supremacy and the material realities of black life. Far from gloomy, however, Lewis’ sculptures are marked by touches of whimsy – a splash of color, a casual placement, a sentimental handprint.

This contemporary relationship between tenderness and violence continues to be evident in the artist’s move from what art collector and minority Memphis Grizzlies co-owner Elliot Perry admiringly calls “hard materials” to more ethereal pyrotechnics, which Lewis considers highly sculptural.

Lewis’ pyrotechnic experimentation began in the summer of 2018 when he attended the Skowhegan School of Painting and Sculpture – a highly selective and storied summer residency for emerging artists in rural Maine that boasts illustrious alumni students like Ellsworth Kelly, David Driskell and Robert Indiana. During his residency, Lewis began to ruminate on breakpoints. He had been grappling with images of police brutality and concurrent protests in places like Ferguson, Mo., and Baltimore. “As a black person,” he explains, “you can’t hold back so much for so long.”

While conducting visual research to investigate the ways in which a “very justified” explosion could be rendered sculpturally, Lewis realized that there was little visual difference between the flames that emanate from a firework and those of a car on fire. “One is socially acceptable,” he says, “the other is not.” To test his theory, Lewis built three small concrete columns and placed fireworks inside them.

At dusk in a large meadow, Lewis lit his first fireworks display.

“It was thrilling,” recalls Sarah Workneh, Skowhegan’s co-director. “Everyone was pretty excited for this to happen and for it to happen here,” she said of the audience. “They were excited about the event itself, seeing themselves being shown what is possible.” In addition to his full-time position as a lecturer at the Yale School of Art, Lewis works as director of the sculpture workshop at Skowhegan. Workneh characterizes the power of this first firework as part of Lewis’s “dangerous generosity”.

This first foray immersed Lewis in the complex and multi-million dollar industry of professional pyrotechnics. He wanted access to an industry governed by complex state and federal regulations and dominated by a small number of large companies. The costs of fireworks could be prohibitive for under-resourced communities, many of which are black, he realized, and the industry is overwhelmingly white. Lewis was undeterred.

He began working part-time for a large pyrotechnics company, obtaining on-the-job training and eventually his license as a display operator. As part of his job, Lewis was sent to small towns in the Southeast where he was one of the few black people. He described these experiences as “frightening” and “uncomfortable”.

“As a black male under 30 in this country,” he says, “I have two options. I can either be six feet under or in a six-foot cell. to avoid these options are just inherent risks of survival.

Independently, Lewis applied for licenses in several southeastern states and eventually his Federal Alcohol, Tobacco and Type 54 Firearms License, which allows him – in conjunction with a commercial driver’s license endorsed Hazardous Materials – to purchase, transport and fire professional-grade fireworks.

“Part of what I love about fireworks,” Lewis explained, “is that I can be in the dark.”

Pyrotechnics is not new in contemporary art. Judy Chicago was detonating fireworks in the desert as part of her feminist response to the Land Art movement in the 1960s. More recently, Cai Guo-Qiang has achieved international acclaim for her explosive art, perhaps the most popular during the opening ceremony of the 2008 Beijing Olympics. But Lewis’ displays are tonally different from those opulent productions.

Currently, Lewis bears all of the costs of his own travel and transportation of the fireworks (although the organizers pay for the equipment and the cost of insurance). He has little control over the product he buys, especially as supply chain delays disrupt the industry. Sometimes Lewis doesn’t even know what colors are available. His shows are meticulously timed. “One thing I’m learning about myself,” he says, “is that I really like logistics.” But for most viewers, they’re indistinguishable from the shows you might see around the 4th of July.

Greenwood is east of the Mississippi Delta, not far from where the Tallahatchie and Yalobusha rivers meet to form the Yazoo. According to the 2021 U.S. Census, more than 70% of the city’s 1,400 residents identify as black. Nearly 30% of the population lives below the national poverty line. The city currently hosts two fireworks displays – one with a Christmas parade and another for Independence Day, but none for Juneteenth. Two hours south of Jackson, where 80% of the population identifies as black and the poverty line hovers around 24%, the city council earlier this year passed measures to fund pyrotechnics on June 16 and June 4 July – a combined cost of $25,000 – according to the news.

To get to Greenwood, Lewis flew from Bangor, Me., to Nashville, Tennessee. He then traveled to Indiana to pick up the fireworks and returned via Memphis before heading further south to Leflore County. The trip took him about 15 hours. It was carrying nearly 300 pounds of fireworks for a show that was expected to last less than five minutes. Lewis would return to Memphis that evening to catch an early flight the next morning. He had never been to Greenwood before, but the site plans he sent in advance were approved by the fire marshal.

The Juneteenth festival had the feel of an extended family reunion. It was organized by three friends, all in their twenties, who grew up in Greenwood. They saw it as both a celebration and “a reminder that your ancestors weren’t free,” as Kenneth Milton Jr., one of the organizers, explained. Attendees danced, joined in a rendition of “Lift Every Voice and Sing,” and played a wholesome (if loud) game of kickball.

As darkness set in, Lewis began his display as planned. It was the last event of the day.

The sky lit up with flashes of pink and green and the air crackled with sound. Suddenly, Lewis sprinted from the tailgate of his truck where he was running the show from the perimeter of a baseball diamond to the chain-link fence that surrounded the outfield. A man – with no affiliation to the Juneteenth event – had breached the security radius that Lewis had established. Lewis yelled at him to come back, but the man persisted. If he were to be injured, Lewis would be responsible.

As everyone looked skyward, Lewis spent the final minutes of the show “eye to eye” with the man, using his body as a shield between the intruder and the exploding fireworks. When the explosions ended, the unidentified man returned to the street that bordered the public park.

Screams and cheers could be heard from the distant crowd. The cars honked gratefully from the road, but Lewis gave no indication that he heard them.

“Sensational,” said Kamron Daniels, 24, another of the organizers, moments after the show ended. When asked if they would do it again, he replied, “Definitely.”

Mayor Carolyn McAdams said: ‘This is a wonderful event for Greenwood’, adding: ‘It was a busy, safe event for people enjoying life with their friends and family.’

Greenwood was the only June 19 celebration that Lewis has “toured” this year – in pyrotechnic parlance – but in the future he hopes to hold a series of exhibits to honor the holiday.

When asked if the expense and effort was worth the price of such a brief fireworks display, Lewis replied, “Why can’t we just have our five minutes?”