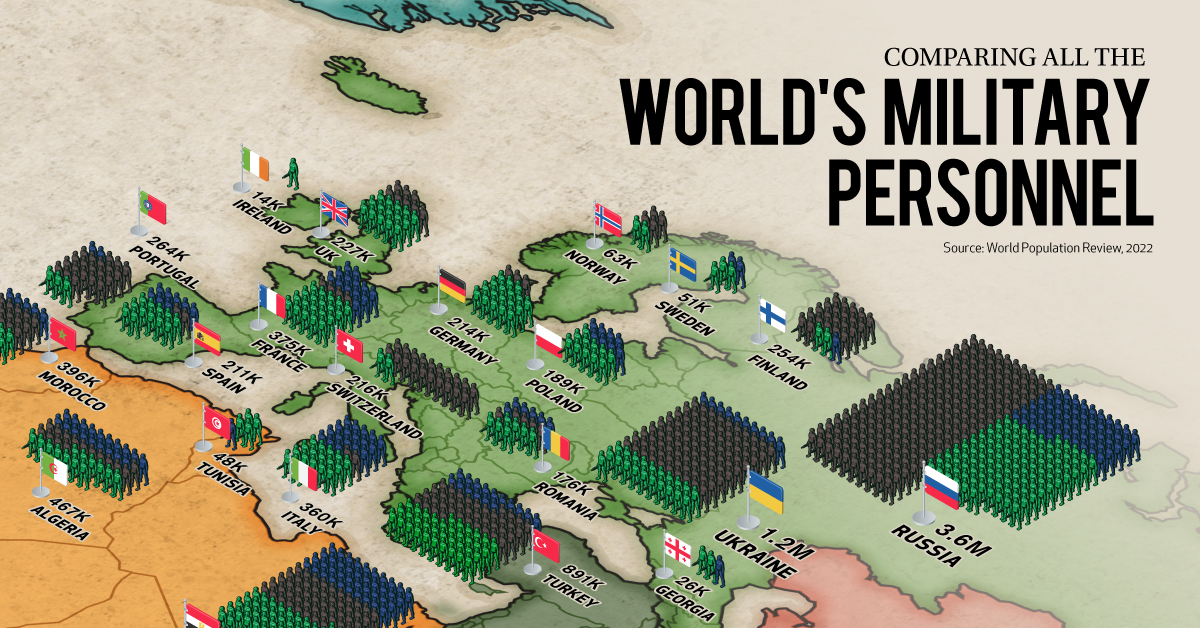 All military personnel in the world

Mapped: all military personnel in the world

As much of the world lives through one of the most peaceful times in history, the spark of new conflicts like Russia’s invasion of Ukraine reminds us of the importance of military personnel.

Between ongoing armed conflicts and the construction of pre-emptive defenses, many countries have amassed significant armed forces to date.

This map, using data from the World Population Review, displays all of the world’s military personnel.

Who has the biggest army?

So who has the biggest army? Well, the answer is not that simple.

There are three commonly measured categories of military personnel:

NOTE: Of these categories of military personnel, paramilitaries are the least well-defined in countries around the world and are therefore not included in the infographic above.

Which country has the biggest army? It depends on who counts.

If we include paramilitary forces, here is how the top countries rank in terms of military personnel:

Combining the three types of armies, Vietnam comes out on top with more than 10 millions staff.

And here are the 10 largest armies in the world, excluding paramilitary forces:

Even then, North Korea remains near the top of the list along with these much larger nations. Excluding estimates of paramilitary forces, the hermit kingdom has nearly 1.9 million active and reserve troops.

The reasons for these immense military sizes are obvious in some cases. For example, in Vietnam, North Korea, and Russia, citizens are required to serve a mandatory period in the military.

The Koreas, two countries still technically at war, both conscripted citizens for their armies. In North Korea, boys are conscripted at age 14. They begin active duty at age 17 and remain in the military for another 13 years. In some cases, women are also enlisted.

In South Korea, a male must enlist at some point between the ages of 18 and 28. Most terms are a little longer than a minimum of one year. There are, however, some exceptions: K-Pop group BTS recently won the legal right to delay their military service, thanks to the country’s culture minister.

Here is a look at some of the other countries that require their citizens to perform some form of military service:

In many of these countries, geopolitical and historical factors explain why they have instituted compulsory service.

In the United States, many different factors explain why the country has such a large military force. On the one hand, the military-industrial complex fuels the US military. A long tradition of close collaboration between the US government and the defense and armaments industry creates economic incentives to develop weapons and defenses, resulting in a need for more personnel.

Additionally, the US military offers job security and safety nets, and can be an attractive career choice. Culturally, the military is also held in high esteem in the country.

Nations without an army

For many countries, building up military personnel is a priority, however, there are other nations that have no armies at all (except for the paramilitary branch).

Here is an overview of some countries that do not have an army:

Costa Rica does not have an army as it was disbanded after the country’s civil war in the 1940s. Funds intended for the army were redirected to other public services, such as education.

This does not mean that these nations live in a constant state of peace – most have found other means of mobilizing security forces. Under the Inter-American Treaty of Reciprocal Assistance, other countries like the United States are technically obligated to provide military services to Costa Rica, for example, if needed.

The future of war

International conflicts persist in the 21st century, but now go far beyond the mere number of soldiers on the ground.

New and emerging forms of warfare pose unforeseen threats. For example, cyber warfare and the use of data to attack populations could dismantle countries and cause conflict almost instantly. Cybersecurity failure has been ranked among the 10 most likely risks in the world today.

If current trends continue, the soldiers of the future will face each other on very different battlefields.