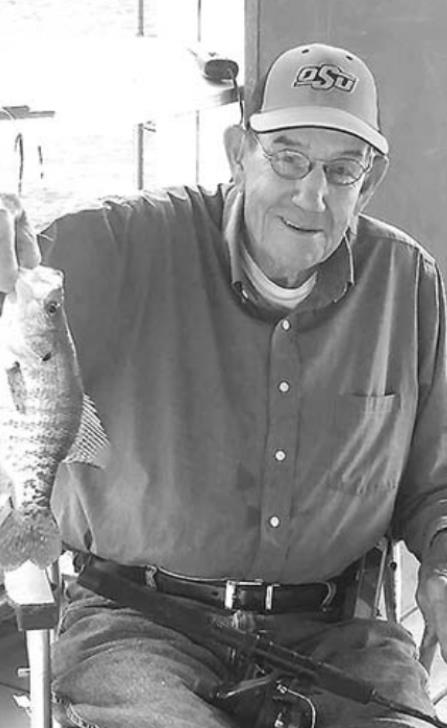 Kenneth Theodore Tipton, 92, of Okarche, died on January 1, 2022 at Mercy Kingfisher Hospital after experiencing deterioration in his health in recent years.

He was born September 20, 1929 near Fairland to George Wallace Tipton and Lucy Evalena (Harbaugh) Tipton.

Kenneth was born into a large family with meager means.

Playmates were brothers, sisters, cousins, nephews and nieces. His playground was the hills and streams of the Hickory Grove area of â€‹â€‹northeast Oklahoma and his toys were what he could create with his imagination because money and resources were scarce.

Fishing, hunting, swimming, rock climbing and “adventures” filled her days where shoes were an extravaganza.

Resourcefulness was an admirable trait in these difficult times and families came together to help each other.

He admired his â€œUncle Willâ€ Harbaugh who served as a supplier, mentor and role model for young Ken.

Kenneth attended Hickory Grove Small School until eighth grade and kept in touch with the Hickory Grove community throughout his life, contributing time, skills and money to the maintenance of the old school, gymnasium (now community center) and cemetery.

After graduating from Hickory Grove, he attended Fairland High School where he graduated in 1947.

He always felt like a ‘country’ kid going to school in the ‘town’ of Fairland. He admitted that was a strange notion since Fairland remains a small town of a few hundred people, but that was his perception.

After graduating from high school, Kenneth traveled and worked in many states and jobs.

He was working in California when he enlisted in the military in 1951 during the Korean War. He trained at Fort Benning, Georgia, after which he was deployed to France and then Germany for deployment to Korea.

After his release in 1953, he found work at Sheffield Steel in Sand Springs. It would be a job that would shape his life.

During this time, he met his future wife, Lois Ann Wojahn, on a double date arranged by his cousin during a visit to Fairland.

Lois and Kenneth soon became engaged and married on May 28, 1954.

Lois and Kenneth settled west of Tulsa along the “Sand Springs Line” and later in Sand Springs where they started a family and became active in the community.

Kenneth took advantage of the GI Bill training and opportunities available at The Mill to expand his skills and education and became an electronics technician and later supervisor in technical areas of the operation.

He has always been amazed by new technologies and worked hard to understand and apply new innovations. His “resourceful” childhood and willingness to learn combined well to create intelligent solutions to difficult problems and made him a “go-to” problem solver in any field or problem.

As his family grew, he became involved in the community and volunteered his time as Little League commissioner, coach, host dad, exchange student dad and often friend. many who had no friends.

He and Don Sullivan were instrumental in creating the Armco Credit Union (now Green Country Credit Union) for the employees of â€œMillâ€.

He and Lois were proud to be among the faithful who founded St. Andrew’s Lutheran Church in Sand Springs. He felt that it was a great turning point in his journey with Christ.

After an early retirement opportunity at Armco / Sheffield in the early 1980s, Ken started a much busier life working as a technical consultant on many projects related to the plant and his network of friends who “just needed a little help â€.

He also found time to work on his sons’ many projects and travel the country after OSU baseball.

After the death of his beloved Lois in 1997, Ken spent his time visiting children, grandchildren, extended family and reconnecting with childhood friends in the Hickory Grove area.

As part of this busy schedule, he formed a relationship with Florene Meyer Cox during a family reunion.

Florene and her family quickly welcomed Ken (since Florene was also Lois’ cousin) and they married in 2005.

Kenneth and Florene rotated between homes in Okarche, Sand Springs, and Hickory Grove depending on the time of year and the mood that hit them.

They would eventually settle in Okarche where Ken felt connected to the community and to the rhythm of farm life. He was often at arm’s length in a “project” while finding the time to wet a line in the pond.

He quickly made new friends and joined St. John’s Lutheran Church and its wonderful congregation.

His Okarche family kept him busy with their many activities and new technical “problems” to check out.

They were loving and generous with their time and effort as Kenneth’s needs increased as he grew older. They were always available at all times, no matter what time of night or day or whatever was happening in their schedule.

Their love and compassion was immeasurable.

He was predeceased by his parents, siblings, wife Lois and son Kirk.

Services were held at 10 am on Wednesday, January 5 at St. John’s Lutheran Church in Okarche, followed by a funeral service at Hickory Grove Cemetery at 3:30 pm A reception and meal will follow at the Hickory Grove Community Center .

Services were under the direction of Wilson Funeral Home-Kingfisher.

In lieu of flowers, the family is asking for donations to be made for the preservation of the Hickory Grove Community Center and School. Please send to Mike Tipton, Attn: HGCC, 24149 S. 600 Rd., Grove, OK 74344.