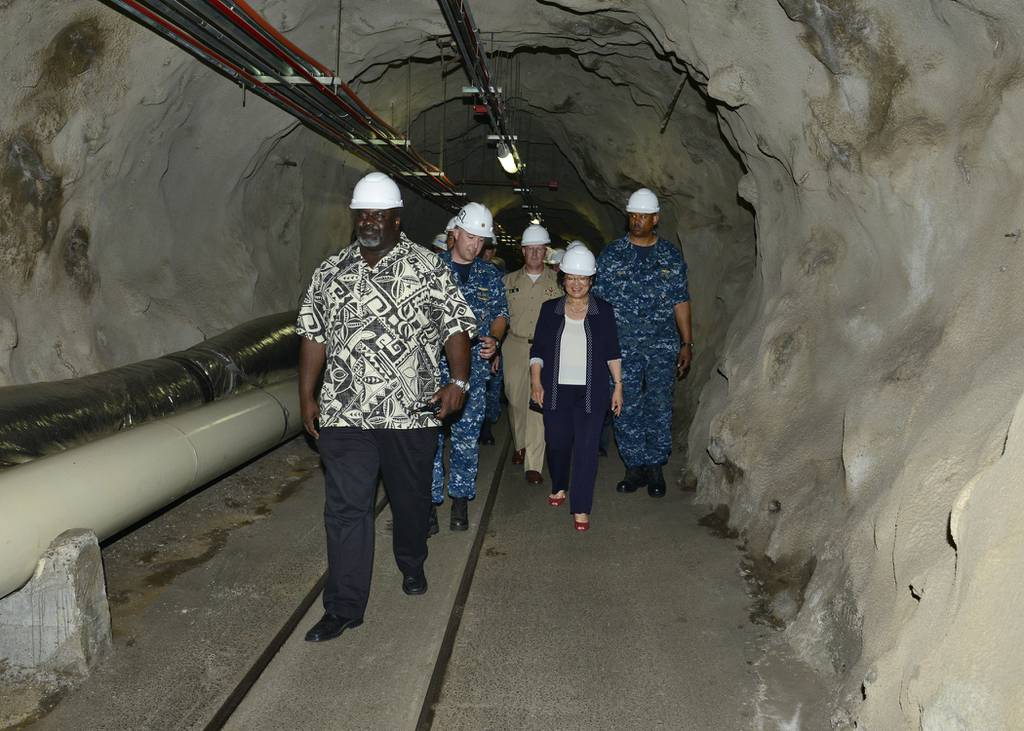 The Department of Defense Inspector General has warned the Navy and the Defense Logistics Agency that it will conduct a thorough review of the management and oversight of the Red Hill Bulk Fuel Storage Facility of the Navy, starting this month.

The review was requested by the Hawaii congressional delegation on December 6 following reports of the discovery of oil in tap water for military housing at Joint Base Pearl Habor-Hickam. But the delegation made several requests to review the facility, based on concerns about security risks.

On November 28, a number of military families reported smelling fuel in their tap water. Although there were conflicting reports initially, the Navy confirmed on December 3 that oil was found in the water. Many of the more than 3,000 families from 12 different communities on the Navy’s water system have left their homes to move to hotels at government expense. Families in six Navy, Air Force and Army residential communities are affected.

Some have stayed at home for various reasons and are provided with clean water, showers and laundry service. As the Navy has started to flush the system, the process will not be over for the holidays; many families have organized their vacations around a hotel room. But other concerns are also looming, including possible long-term health effects.

The auditors will review the operation, maintenance, safety measures and oversight of the facility by the Navy and its protection of the environment and drinking water systems in accordance with federal and state regulations and DoD policy, according to the December 20 memo signed by Randolph R. Stone, DoD Assistant Inspector General for Space, Intelligence, Engineering and Surveillance Assessments.

Navy officials said the contamination likely occurred on November 20, when 14,000 gallons of jet fuel spilled inside an access tunnel providing fire extinguishing lines and service for the WWII fuel storage facility. The Navy announced on December 6 that it was suspending operations at the facility. Navy officials said they believed the contamination was the result of a one-time spill, not a leak in aging underground fuel storage tanks.

Meanwhile, Navy officials began flushing water lines in several neighborhoods on Monday, based on a plan outlined in a joint agreement between the Navy, the State Department of Health. Hawaii and the Environmental Protection Agency Dec. 17. According to the estimated schedule, the Navy expects to complete the flushing and repeated water testing in all communities by January 24. Officials said it should take around two weeks for each community, so families who have left their homes to travel to government-provided hotels will spend their vacations there. .

Flushing will continue until testing confirms the drinking water is safe to drink, as determined by the Hawaii Department of Health. Navy officials said they will continue to provide all necessary support to families and communities throughout the flushing process. Some morale, well-being and leisure activities have been put in place to provide holiday activities, officials said on Monday.

Even before the leak, Hawaii’s congressional delegation had repeatedly called on DoD IG to investigate the facility. On November 3, they asked DoD IG to determine whether the Navy had properly investigated other recent fuel releases at the facility.

“Recent events have called into question the Navy’s operations at the Red Hill facility and their ability to ensure the safety of the water supplied to Hawaii military families and residents of Oahu,” said the Navy. delegation of Congress. “The IG’s findings will be critical in determining Red Hill’s future,” said Senators Mazie K. Hirono and Brian Schatz, and Representatives Ed Case and Kaiali’i Kahele.

The DoD IG said the assessment would include Navy Installations Command, Naval Facilities Command, Naval Supply Systems Command, and Joint Base Pearl Harbor-Hickam. At the DoD level, the assessment will include the offices of the Undersecretary of Defense for Acquisition and Sustainment and the Undersecretary of Defense for Personnel and Readiness, and the Air Logistics Agency. defense.

According to the Navy’s Red Hill facility’s webpage, the storage facility supports U.S. military operations from all branches of service in the Pacific. â€œUnlike any other fuel facility in the United States, Red Hill can store up to 250 million gallons of fuel,â€ officials say. There are 20 underground steel lined storage tanks embedded in concrete.

Concerns have been raised for years by authorities in Hawaii over the safety of Red Hill’s fuel storage tanks, which sit about 100 feet above a key aquifer. In January 2014, the Navy reported a leak of 27,000 gallons of jet fuel in one of the tanks. The Hawaii Board of Water Supply has urged the Navy, Environmental Protection Agency and the Hawaii Department of Health to double the tanks or move them away from this key aquifer, and clean up the fuel that is already under the tanks to reduce the threat to other wells in the region.

The Red Hill facility is also addressed in the FY2022 Defense Clearance Bill which now awaits the President’s signature. Lawmakers note that “Congress believes the Secretary of the Navy and the Defense Logistics Agency should operate and maintain the Red Hill Bulk Storage Facility to the highest possible standard and require more frequent safety inspections.” â€¦ “

The Defense Bill requires an inspection of the facility by an independent inspector certified by the American Petroleum Institute. The required inspection excludes the fuel tanks from the facility, but the Navy will prepare a lifecycle maintenance plan for the facility, which will take into account the current condition and life of the tanks, system piping and support equipment.

The Secretary of Defense will need to conduct an assessment of alternative locations for the secure storage of bulk fuel, including at least three locations outside of Hawaii.

Karen has covered military families, quality of life and consumer issues for Military Times for over 30 years, and is co-author of a chapter on media coverage of military families in the book “A Battle Plan for Supporting Military Families “. She previously worked for newspapers in Guam, Norfolk, Jacksonville, Florida and Athens, Georgia.