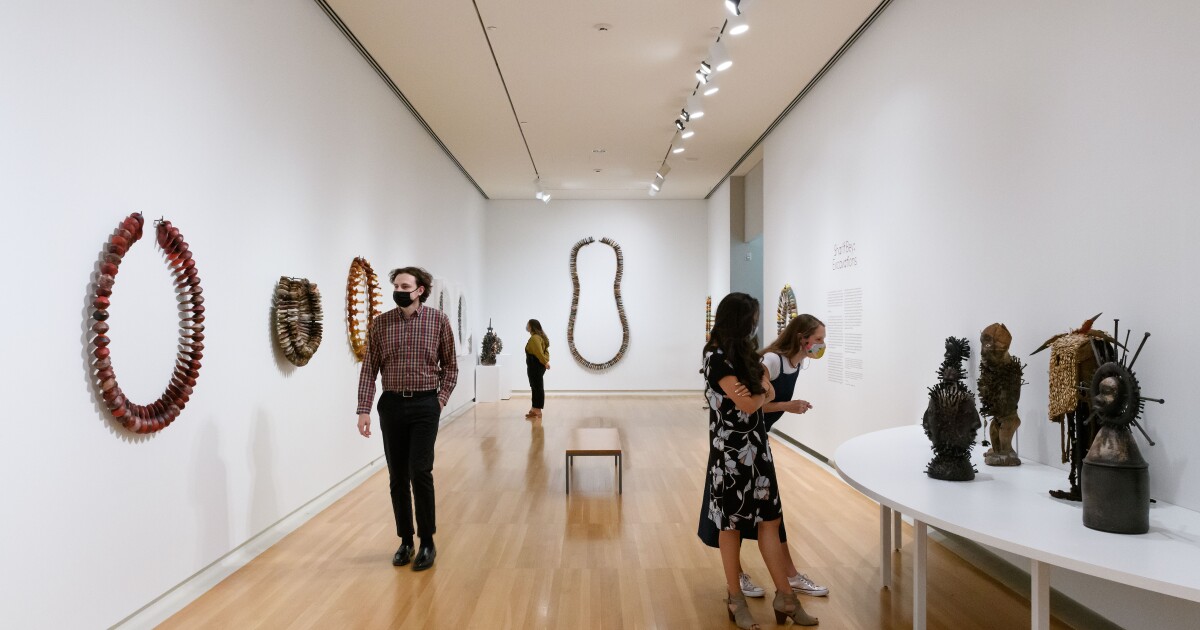 Almost four decades ago, Sharif Bey was a 9-year-old student in the Art Connection program at the Carnegie Museum of Art. Every Saturday he was driven from his home to the working-class town of Beltzhoover and joined the other kids in the Hall of Architecture for drawing sessions.

But that was not all. Art Connection was also Bey’s ticket to exploring joint museums of art and natural history without a chaperone – a rare privilege.

â€œWhat was really special to me was the kind of autonomy I had in this institution as a youngster,â€ Bey said. â€œAnd that autonomy allowed me to walk around the museum and, you know, see things that maybe other kids wouldn’t spend time with, or maybe things their parents could take them away from. . â€

Bey, now 47, has become a ceramicist and multimedia artist whose work is exhibited around the world.

And these first wanderings have come full circle with “Sharif Bey: Excavations”. This black artist’s first solo exhibition at Carnegie is based on his recent digs into the collections of both museums, with his own works on display alongside, or sometimes incorporating, the art and artifacts that inspired them.

A suite of his sculptures, for example, was set off by one of the nkisi figures of power, West African tribal sculptures of humans generally made of wood and studded with nails.

â€œIt was sort of one of the major objects for me as a kid,â€ said Bey, visiting the museum on the opening day of her exhibit. “It was an object that evoked a lot of different types of curiosity to me, and then I started to sort of add it to my repertoire by exploring a number of different types of vessels and figures.”

The forms Bey takes in the new exhibit are ceramic rather than wood – although they are still often â€œimpaled,â€ as he puts it. Some are hung on the wall and others are real table containers, with caps. It’s a reminder that with Art Connection, another part of Bey’s artistic training was learning ceramics as part of the Manchester Craftsmen’s Guild Apprenticeship Program.

He then studied sculpture abroad, in the Slovak Republic, and obtained a BA in Ceramics from Slippery Rock University and an MA in Fine Arts from the University of North Carolina at Greensboro.

Bey is now a professor at Syracuse University. His works, drawing inspiration from traditional African art, the natural world and more, have been exhibited in public collections as far as Indonesia, Uganda and Sudan, and he has had solo shows and exhibitions. group, all over the United States.

In “Excavations,” Bey even incorporates shapes and objects from the Carnegie Museum of Natural History.

The most direct appropriation is presented in two wall works, each depicting at least 100 colorful and feathered bird skins from the collection, arranged in radial patterns, like mandalas. The museum collected these â€œstudy skinsâ€ from around the world between 1889 and 1993 for research purposes; Bey uses their hues and shapes for more purely aesthetic purposes.

â€œI felt like I was painting or weaving, or maybe doing both, because I literally spin colors with objects,â€ he said.

Another piece, “O’Keeffe’s Leis”, recalls Bey’s childhood fascination not only with the museum’s iconic dinosaur skeletons, but also the steel frames that supported them, which he considers sculptures apart. whole. True to his interest in jewelry works in recent years – he calls them “adornments” – “O’Keeffe’s Leis” is a large necklace, although far too heavy to wear. And it’s made from casts of the vertebrae of two dinosaurs: the Duck-billed Edmontosaurus and the Apatosaurus.

â€œI actually used casts of vertebrae that the paleontology department had here, and made molds from those to produce them in glass,â€ Bey said. “I literally used an object from natural history and translated it into glass.” (The title of the work of course alludes to the work of painter Georgia O’Keeffe, who had her own fascination with skeletons.)

The largest single piece in the exhibit is “Raptor Rougher”, a 10 foot tall necklace made of colorful, patterned, molded glass raptor talons and mounted on the gallery wall.

Other installations include a display of some of the museum’s Tonga axes, agricultural implements used by the Tonga people in Zimbabwe. There is a history of colonization here, as some Tonga was dispossessed by the British, but Bey said he was also simply intrigued by the shape of the axes, with their raw steel blades.

Closer to home, Bey includes in the exhibition canes carved by her father, Nathaniel Bey, a coppersmith who also frequented the Carnegie. The sticks hang next to sticks carved by Sharif Bey.

Although his work has been exhibited around the world, getting personal exposure at the institution where his artistic career began in some ways is particularly meaningful, Bey said.

Carnegie’s Art Connection program, however, survives, just as it did when Bey walked the museum lobby nearly 40 years ago.

The hydrogen moment has finally arrived