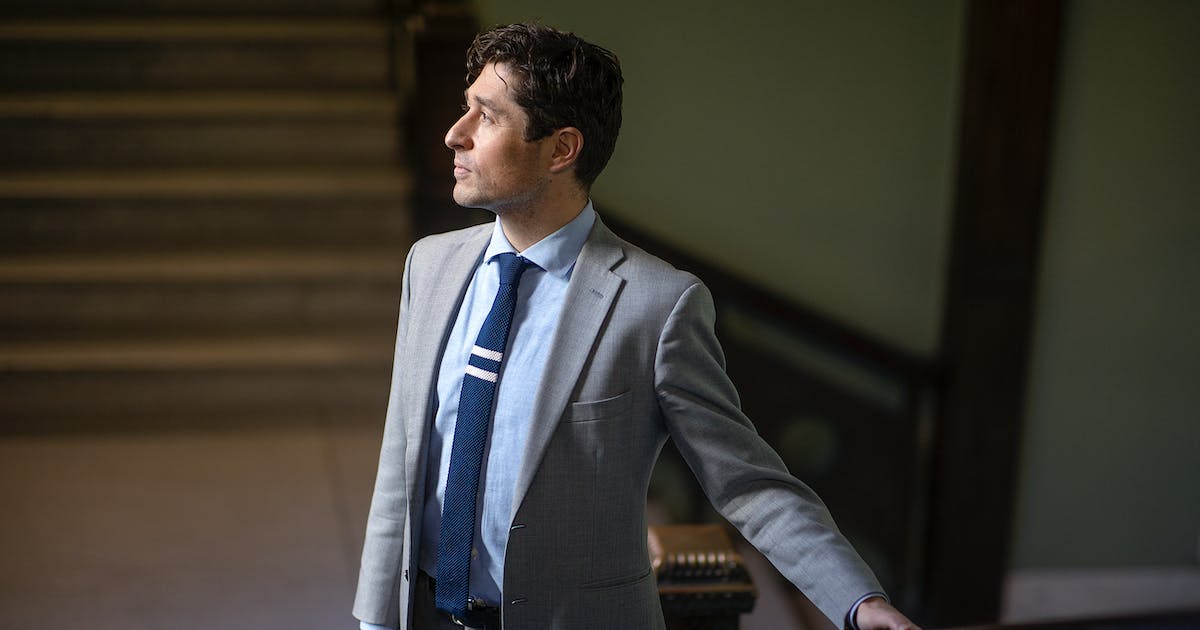 Q&A: Minneapolis Mayor Jacob Frey’s priorities as he leads a city in turmoil

The 40-year-old Minneapolis mayor speaks with Star Tribune reporter Susan Du about his second term, stabilizing City Hall, community crime and the future of the city. The interview has been edited for length and clarity.

Q: Just a few years ago, the city center was a great place, hosting big parties, planning developments for masses of people coming from the suburbs. It doesn’t look like we can expect people to return any time soon.

A: There isn’t a single mayor in the entire country who doesn’t want things to happen faster. According to the latest news, we are hovering around 50% or 45% occupancy. This number will continue to increase but inevitably it will not reach the same numbers we saw before the pandemic. Remote work, doing things via Zoom or Teams was to some degree inevitable, but it was probably accelerated by six to 10 years by COVID-19. So some of the space will likely need to be turned into residential or co-op style space.

Q: The new owners of the Timberwolves want a new arena. You said you are not in favor of a subsidy. Are you willing to let the team walk if they play hardball?

A: There is no agreement at this stage. Commenting on a non-existent deal would be entirely speculative. I have outlined my general position with respect to the public subsidy, and at the same time, each agreement is different. Of course, if they come with their own money, I’ll listen. This is the first step.

Q: Last term, you had three priorities as mayor: affordable housing, economic inclusion and police-community relations. What progress has been made?

In the area of ​​economic inclusion, we have been seriously focused on ownership, especially for [Black, Indigenous, people of color] and immigrant communities. I am convinced that ownership is the best way to create intergenerational wealth. One of the big things we’re pushing on is enabling ownership, both in terms of residential and commercial ownership. [through the Commercial Property Development Fund], so that our black and brown communities have the opportunity to not only own their own business, but also own the underlying real estate. We are investing millions and millions of dollars in this effort. There must be more.

Q: With respect to police-community relations, how have you increased the transparency of Minneapolis Police Department practices since the murder of George Floyd?

A: Part of transparency is knowing what our agents are doing and making sure they are held accountable for those actions. We have a scorecard that is more comprehensive than any other city in the entire state, by far. Now often the information we get from this dashboard shows gaps. That’s the point. We want people to have the information, good, bad or ugly, and then we want to be able to act on it. We want to keep improving and improving this dashboard and also improving its accuracy and consistency.

Q: During civil unrest, there have been instances where bystanders, peaceful protesters, and other non-combatants have been dealt with forcefully. We still do not know what happened to these complaints. Are you delaying disciplinary decisions because of the police manpower crisis or the pending civil unrest after-action report?

A: No no. That couldn’t be further from the truth. Disciplinary and dismissal decisions have been taken. In some cases, officers resigned preemptively. In some cases, after the decision has been made, we await the final decision from arbitration. Here’s the problem, no one has a better interest than me in following up on these disciplinary and dismissal decisions, or preventive resignations. The law clearly says that we cannot talk about it. I’m not going to sacrifice the ability to hold officers accountable for the sake of politics.

Q: This year, when it comes to crime, we equaled the city’s previous record of 97 homicides. How confident are you that we can reduce this?

A: Every major city in the country is experiencing a significant increase in violence and crime, but who cares? We live here. People are affected by this crime and this violence here. I’m the mayor here, and we have an obligation to do everything we can to curb this senseless violence, especially in the form of shootings, carjackings, home invasions, robberies.

We have laid out the plan, which is both comprehensive and collaborative, that will move us in the right direction. It involves one, an integrated public safety system to include everything from police to the Office of Violence Prevention, mental health responders, violence interrupters, to have a comprehensive approach capable of delivering a unique skill set for the unique experiences that happen on the ground.

We need to hire more community-focused officers invested in procedural justice. I will have an aggressive campaign to move in this direction. We need real reform.

A: I believe everyone should have a safe place to come home to at the end of the night, rest their head on a pillow, and recharge for the next day. It is clear that this right is not available to everyone. To achieve this, it behooves us not to follow the policy but to follow the data. Where is our money best used to provide the most housing for people who need it? I am committed to following exactly where this data leads.

Q: Early last year you talked about building a permanent memorial to George Floyd. Where are those blueprints now?

A: I shouldn’t be – and no elected official should be – the one dictating the end result. The community and especially our black and brown communities should be at the center of the next steps in shaping the look of the memorial itself.

Q: The city recently closed a number of homeless encampments. Do you think the city’s current policy towards encampments has been effective, given that even though investments have been made in expanding shelters, there are still people who do not want to use these services?

A: We have a Housing First approach, which prioritizes placing people in low-barrier or barrier-free housing, in safe and warm shelter, in spaces where they are not at risk of injury. We know from experience that homeless camps are not safe, especially for women. We have numerous documented cases of murder, human trafficking, drug trafficking and data showing that homeless encampments have put the people directly in them at risk.

Q: Are there plans now for a permanent location for the Third Ward?

A: As you probably know, I supported rented space [in Seward] what we were looking for. That was probably a year ago now. City staff continue to find a suitable and permanent location.

Q: Should we find someone from outside the MPD to be the new leader, especially if there is a cultural problem to overcome?

A: We want the best and the brightest. We want an extraordinarily reforming leader to step into this role who is focused on both reform and public safety and understands the deep strategy and collaboration needed to get it right. And yes, as you know, we are conducting a national search to search across the country who is the best possible person.

Q: During the election season, there was an “Anyone but Frey” campaign that many state legislators and U.S. Representative Ilhan Omar joined. Did these people reach out to you to bury the hatchet?

A: Some yes, some no. I have always had an open door policy. I believe in good faith collaboration. You work together for the betterment of the city and put politics aside. Unfortunately, politics took center stage last year, sometimes even ahead of good governance. The election results speak for themselves, and they were very clear. I have often seen people speak on behalf of communities of color. The difference is that we listened to them, and the results confirmed it.

Q: This year, public works employees had difficult contract negotiations. These employees were sent to do grueling work, including clearing settlements and demolishing barricades in protest areas. Do you have something to tell them?

Q: How does your job as mayor in these times compare to being a new dad?

A: Let me start with Sarah, because she is the most important. She has a spine of steel. The past two years have been difficult for our entire city, and my family is no exception. During the election, it was like every other day people were vandalizing our house, sometimes with anti-Semitism, sometimes with “defunding the police”. It took a lot of courage as a partner to keep plodding along. She did, and at the same time she was either heavily pregnant or a new mom. And Frida provided this beautiful reprieve from everything. She has no idea what’s going on with the rest of the world. She’s just thrilled to try to go down the stairs.