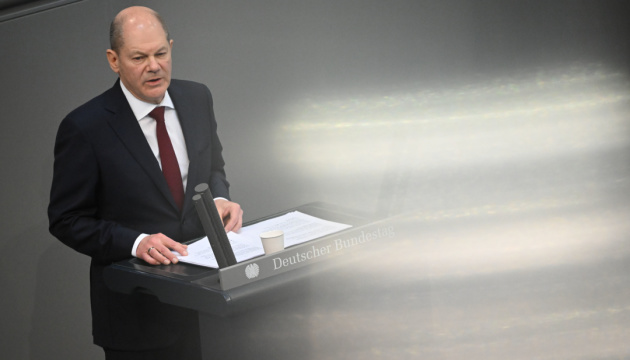 The European Union will do its utmost to abandon its energy dependence on Russia, but for now the bloc cannot afford to give it up completely.

This was said by German Chancellor Olaf Scholz ahead of talks with European Parliament President Roberta Metsola in Berlin on Tuesday, a Ukrinform correspondent reports.

As for the introduction of an embargo on energy imports, Germany’s position, according to its chancellor, “has not changed”, and the same goes for the position of “many, many”. other countries that depend on Russian coal, oil and gas import even more than Germany, he added.

However, Scholz added, it was decided to get rid of dependence on Russian energy as soon as possible. For this, it is necessary to build infrastructure and conclude agreements with other suppliers. Thus, if the diversification is achieved very quickly, “the effect will come automatically”.

Europe and its friends have imposed the most massive and well-prepared sanctions that have ever been imposed on such a big country, and they are already producing an effect which “will become more dramatic every day”, says the German politician .

At the same time, according to Scholz, it is a question of making these tools “manageable”, that is, of minimizing their effect on Western economies because it is a long-term confrontation.

In general, Scholz welcomed the common position of the European Union and transatlantic partners, stressing that the EU only achieves something when it works together – the European Commission, the European Parliament and the member states.

“Europe and the world have changed because of Russia’s attack on Europe. But Europe has been and remains our most important peace project,” Scholz said.

Responding to a request from journalists to comment on Poland’s proposal to exclude Russia from the World Trade Organization and the G20, the German chancellor said the matter was in the hands of member states.

Scholz said he had invited G7 leaders to a meeting on Thursday, ahead of the EU Council summit in Brussels.

The Chancellor reiterated his request to Putin to immediately cease hostilities in Ukraine and to withdraw his troops from Ukraine. A ceasefire is urgently needed, the politician stressed. He also stressed the importance of a meeting between the Russian and Ukrainian presidents being held as soon as possible.

Read also: Zelensky blames Germany for realizing too late who Russia is

As reported, on February 24, Russian President Vladimir Putin announced the start of the invasion of Ukraine. Russian troops are shelling and destroying key infrastructure, carrying out massive shelling of residential areas of Ukrainian towns and villages using artillery, rocket-propelled grenades and ballistic missiles.

The European Union and a number of other countries, including the United States, Canada, Australia and the United Kingdom, have imposed sanctions on Russia for the war in Ukraine. Hundreds of companies have suspended their activities in Russia and withdrawn from joint projects with Russian partners.

According to Ukrainian Foreign Minister Dmytro Kuleba, due to the unconstructive position of some governments, the fifth sanctions package introduced by the European Union will not include an embargo on Russian oil and gas.

Germany is seeking independence from Russian gas and is refocusing on other suppliers, including Qatar. German Economy Minister Robert Habeck’s visit to Doha on March 20 was precisely devoted to this question.