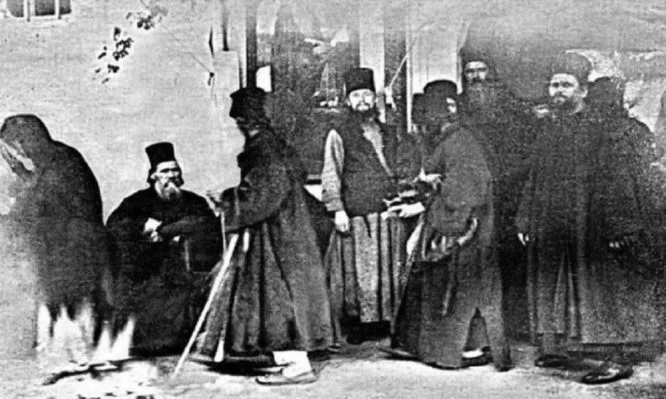 This 1903 photograph of a woman on Mount Athos, which was published in a Greek newspaper around this time, still remains a mystery, with some monks claiming they believe the unknown woman on the left was the Virgin Mary herself. same.

It is universally known that women are not allowed in any of the twenty monasteries on Mount Athos (Agion Oros) or even on the mountain itself, a rule strictly enforced since the 4th century, when the first monastery was built in the Region.

As the monks say, the only woman allowed on Mount Athos is the Virgin Mary; hence the appearance of what appears to be a woman in the grainy black and white photograph.
It was August 21, 1903 according to the old calendar, which follows Mount Athos. The monks had been summoned by bells which had sounded at the monastery of St. Panteleimo.

It was the eve of the annual “nine days” of the Virgin Mary, and according to the custom of the monastery, it was time to give to the poorest monks, the so-called “cellists”, or those who spent their lives in small rooms, a little charity, enough to make their difficult life a little easier.

The usually reclusive monks had gathered and lined up to receive much-needed alms from other monks. However, this would be the last time that reclusive monks were to receive the annual charity, as the monastery’s meager finances did not allow the alms to continue for another year.

One of the monks, with the religious name of “Gabriel”, had a camera and wanted to capture the last time the monks had to meet to receive alms.

According to the tradition of the monastery, Gabriel quickly saw a miraculous sight in front of him. In the midst of all the assembled monks, suddenly appeared a mysterious woman, all in black. He didn’t hesitate, but immediately started taking pictures, a painstaking process at the time.

The monks were convinced that the woman in the grainy photograph was Notre Dame, who had appeared to express her sadness and show the monks that they should not stop their good works of giving alms to the poorest monks. That was the only reason she had let Monk Gabriel photograph her.

When the amateur photographer showed the photo to the rest of his fellow monks, it didn’t take long for them to figure out what really happened. And they decided to continue their annual good works of charity to glorify God and his Beatitude.

The photograph was hidden for many years in the archives of St. Panteleimon Monastery, not being made public until 1997.

Religious pilgrims consider the image to be an undeniable photographic confirmation of a great miracle in the monastery. Ecumenical Patriarch Bartholomew of Constantinople also saw and admired the photograph during one of his visits to Mount Athos.

Mount Athos is of course part of the European Union, just like the rest of Greece. However, the Holy Mountain monastic state and Athonite institutions have special jurisdiction, which was reaffirmed upon Greece’s admission to the European Community (the forerunner of the EU).

This empowers the authorities of the monastic state to regulate the free movement of people and goods on its territory. Thus, it is always true that only males are allowed to enter the territory of the Holy Mountain.

However, the sanctuary of Mount Athos has been violated twelve times (officially at least) since the year 382. Here are the incidents in which it happened.

– In 382 by the Plakentia, daughter of Emperor Theodosius I.
– In 1081 and 1108 by shepherd families (numbering more than 300).
– In 1345 by Eleni, wife of the Serbian emperor Stefan Dusan.
– In 1404 by the wife of Ioannis Palaiologos.
– In 1854 by a group of young girls who sought protection after the Halkidiki uprising.
– In 1905 by the young Russian princess Tatiana Nikita.
– In 1929 by Aliki Diplarakou, the Greek â€œMiss Europeâ€ – dressed as a man!
– In 1931 by the French journalist Maryse Choisy, who disguised herself as a sailor and recounted her experience in a book entitled “A month with men”.
– In 1948 by a group of women from the Democratic Army of Greece who broke the guard and entered while being pursued by the Greek army during the civil war.
– In 1953 by the American professor Cora Miller.
– In 1971 by the French philologist Jacqueline Michele and the Italians Luisa Barbarito and Maria Pastterla.

Greek journalist Malvina Karali was the last woman to break the ban and enter Mount Athos territory, when, as she claims, she entered the shrine dressed as a man in the 1990s.

Our View: Joplin’s Proposed User Tax Is a Question of Fairness | Opinion

Ethiopians in Belgium and Luxembourg protest against EU decision