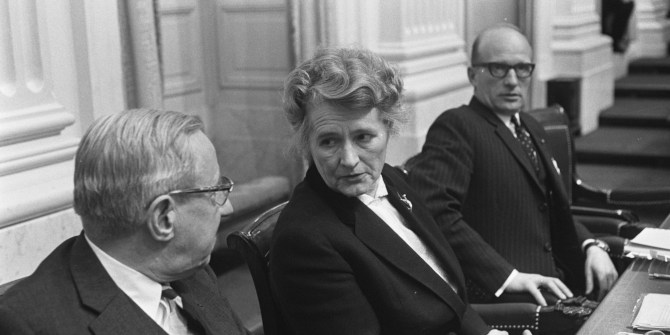 Women are largely absent from accounts of the beginning of the European integration process. Yet as Simona Guerra explains, there were a number of women who played an important role in defining the trajectory of the integration project during this period. Based on new research, it describes the contributions of the first twelve women appointed as representatives to the Common Assembly and to the European Parliament in the 1950s and 1960s.

Every time we open a textbook on the European Union, we can read the stories of the founding fathers of the integration project and the politicians who shaped European integration in the 1950s and 1960s. Yet in these accounts, women are almost entirely absent.

While it is true that there were not many women in important positions of power at that time, some were appointed as representatives in the Common Assembly, the ancestor of the European Parliament. Some of these women have made a significant contribution to the integration project, as have others who have held positions at international, European and national levels.

As Gabriele Abels and Heather MacRae write, the minimization of women in the narratives of European integration means that our history of the process remains incomplete. For this reason, recent work has focused on highlighting the role played by women. Maria Pia Di Nonno worked on a project covering the biographies of women who shaped European integration, while feminist international relations scholars addressed the marginalization of women’s voices in European studies.

Based on this work, I undertook a project to present the profile and work of the first women of European integration. I argue that more studies and chapters by EU scholars should be devoted to the impact these women had in the early years as creators and formators of the integration process .

The original Common Assembly, which existed from 1952 to 1958, had only 78 members from the six original member states (Belgium, France, Germany, Italy, Luxembourg and the Netherlands). However, five women joined the Assembly in the 1950s and another seven joined the European Parliament in the 1960s. They have been described as pioneering women and rubbed shoulders with the so-called founding fathers of European integration.

Table: List of women delegates to the Common Assembly and to the European Parliament in the 1950s and 1960s

Source: Data from the historical archives of the EPRS

Of course, as the parliament was different and smaller compared to the institution we know today, there were fewer committees, but these women were members of the committees that existed. They were appointed rapporteurs and actively participated in the politics of the time.

Marga Klompé, from the Netherlands, appears in many documents and committees of the Common Assembly. Klompé was the first woman to be appointed, in August 1952, and she took an active part in the work of the Committee on Political Affairs and External Relations of the Community and of the Sub-Committee on Trade Policy, where she was appointed rapporteur for eight related reports the activities of the Community (1952-1953) and its external relations. The debates of this committee focused on the concrete achievements of Europe and the Community.

In Klompé’s words, “the Community is an economic entity which currently covers the territory of a certain number of well-defined countries, but it cannot apply a new isolationist policy since it hopes to work for a stronger and more united Europe, aware of her common heritage, which alone can become a powerful partner in Atlantic cooperation. Far from a possible dichotomy between “Little Europe” and “Greater Europe”, Klompé positively approaches the policy of détente after Stalin’s death, but puts warns against the possible Soviet strategic objective of creating discontent across Europe to the detriment of European unification.

Europe has an enormous task to accomplish in the world and must ensure that it remains a powerful and effective partner in Atlantic cooperation. More than ever, the political situation forces us to be firm, realistic and idealistic. – Marga Klompe, 1953

Jacqueline Thome-Patenôtre, from France, is received in October 1956 by US President Dwight D. Eisenhower. On her return, she wrote that “more than ever, by studying the geographical, economic and demographic structure of the United States, one realizes that only a unified Europe can save the European nations from decadence”.

Mechthild Roos refers to one of his speeches in plenary in December 1969. Writing on the European Social Fund (ESF), Roos details how MEPs behaved in what was a fully-fledged supranational parliament. The Social Affairs Committee worked on the social and political dimension of the ESF, while the Budgets Committee mainly worked on safeguarding and extending the budgetary powers of the European Parliament.

These are just a few examples of how the first twelve women in the Common Assembly and the European Parliament actively shaped the early years of European integration through their national, European and international actions. Given these contributions, it is reasonable to suggest that future accounts of the early integration process should do more to improve our familiarity with the names and work of these women.