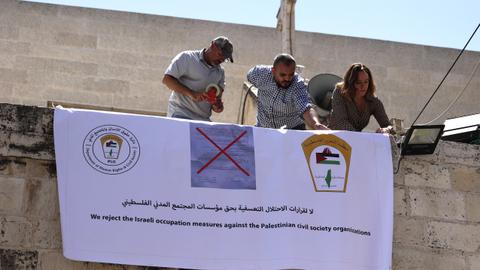 Israeli authorities have not provided any convincing evidence to UN agencies or NGO partners, according to the UN regarding Israel’s accusations.

Israel’s closure of Palestinian nonprofits that the state has labeled “terrorist organizations” has provoked diplomatic backlash and drawn criticism from the UN and European Union as well as the United States.

“Despite offers to review the charges to determine whether funds were misappropriated, Israeli authorities have provided no compelling evidence to UN agencies or NGO partners working in the occupied Palestinian territories to support these designations,” the UN said.

He added that “the extent of Israel’s 2016 counter-terrorism legislation and its impact on the presumption of innocence present serious concerns under international law.”

“Israel’s disturbing designation of these organizations as ‘terrorist organizations’ has not been accompanied by any concrete and credible public evidence,” said a statement attributed to human rights experts under the auspices of OHCHR. to human rights.

The office of the European Union representative in Palestine says allegations that Israeli-sealed Palestinian non-governmental organizations (NGOs) misused union funds are “unproven” and will continue to support Palestinian NGOs.

The Israeli army stormed and ordered the closure of seven Palestinian NGOs in the West Bank cities of Ramallah and Al-Bireh, witnesses said.

Last week, the EU decided to release funds allocated to six of the Palestinian NGOs, but despite the vote, the European Commission did not announce that the funds would be released.

US State Department spokesman Ned Price told reporters on Thursday that Washington was “concerned” about the shutdowns and had “sent the message that there has to be a very high bar for action against organizations of Civil society”.

The NGOs that were searched were the Addameer Prisoner Support and Human Rights Association, the Al-Haq Center, the Bisan Center for Research and Development, the Union of Palestinian Women’s Committees, the Union of Labor Committees of Health, the Union of Agricultural Work Committees and Defence. for Children International – Palestine.

Last year, the Israeli authorities decided to shut down six of these NGOs, claiming that they were “terrorist organizations”.

An Anadolu Agency correspondent reported that the Union of Health Work Committees was not on the Israeli list released last year.

Witnesses told Anadolu Agency that during the raids, Israeli forces confiscated files and computers and destroyed their contents.

READ MORE: Israel’s defamation of Palestinian NGOs is not the first and will not be the last