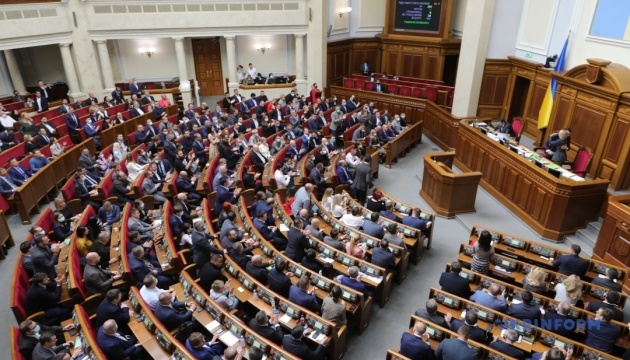 The corresponding resolution “On the declaration of the Verkhovna Rada of Ukraine” On priority issues of the integration of Ukraine into the EU “was supported by 304 deputies, reports a correspondent from Ukrinform.

“The Verkhovna Rada of Ukraine (…) calls for the recognition of the prospect of Ukraine’s accession to the EU in accordance with Article 49 of the Treaty on European Union”, we read in the press release.

According to the document, the Ukrainian Parliament confirms Ukraine’s strategic move towards full Ukraine membership of the European Union, enshrined in the Constitution of Ukraine.

MEPs call on the European Parliament to immediately consider in the plenary session and take action to ban the Nord Stream 2 project as it goes against the EU’s third energy package, the principles of the Community of the energy and poses a risk to Europe’s energy security.

The Verkhovna Rada underlines the threats to the energy and geopolitical security of Central and Eastern Europe posed by the Nord Stream 2 project and calls on the EU, its institutions and the Member States to take into account the risks posed by its functioning and to take all possible measures to prevent the use of energy resources as weapons.

Members of the Verkhovna Rada urge the European Parliament and the parliaments of the Member States to take further steps to strengthen sectoral cooperation and provide support to Ukraine in the implementation of the principles of the European Green Agreement in Ukraine, as well as to coordinate the actions of the parties taking into account Ukraine’s updated nationally determined contribution to the Paris Agreement.

Parliamentarians believe that access to financial resources within the framework of the implementation of the European Green Agreement should be a catalyst to reduce the economic development gap between Ukraine and the EU Member States and call for the European Commission to actively cooperate with the Ukrainian government in implementing the economic and investment plan for the Eastern Partnership and jointly coordinate international investments in the green transformation of Ukraine.

Members of the Ukrainian Parliament welcome the continued support of the European Union and its Member States for the territorial integrity and sovereignty of Ukraine in the face of Russian aggression and stress the importance of maintaining and strengthening sanctions against Russia following the attempted annexation of Crimea and the temporary occupation of Donbass.

The members of the Verkhovna Rada express their gratitude to the representatives of the institutions of the European Union for participating in the celebrations of the 30th anniversary of the independence of Ukraine and the inaugural summit of the Crimean Platform, as well as for having supported Ukraine’s access to safe and effective COVID. -19 vaccines and ensure continued cooperation to overcome the pandemic.

As reported, this year’s EU-Ukraine summit will take place in Kiev on October 12.

The global tax treaty will set a minimum rate of 15%