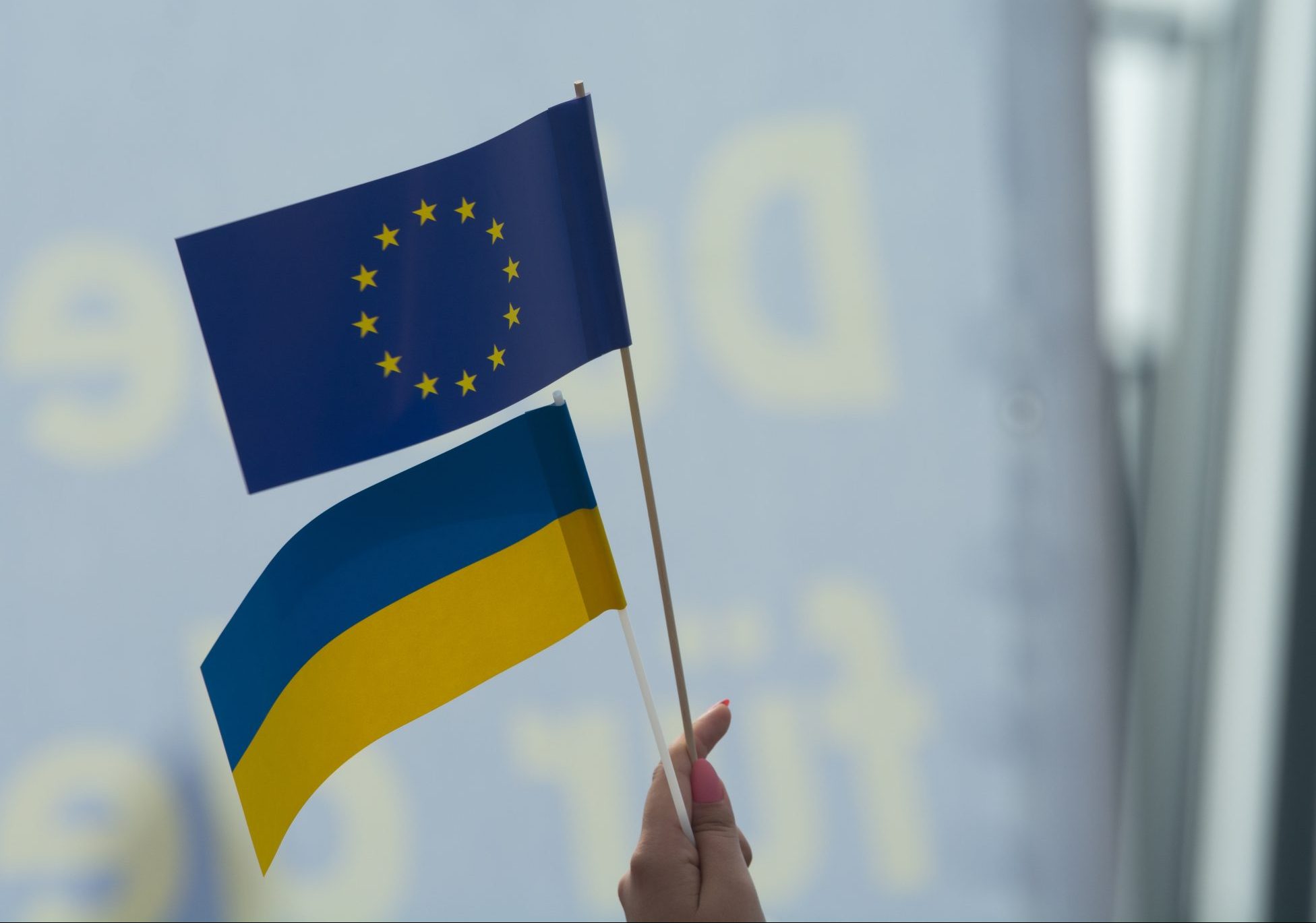 Ukraine’s aspirations for European integration will be on the agenda of the next European Council in Brussels on 23 and 24 June. European leaders are expected to formally grant Ukraine EU candidate nation status at the summit, marking what would be another milestone in the country’s long journey towards closer ties with the 27-nation bloc.

Recognition of Ukraine as a candidate country would not guarantee future EU membership. In effect, Ukraine would become one of many countries with the same candidate status. Nonetheless, it would represent a significant breakthrough for Kyiv at a time when Ukrainians are defending their country against Russian invasion in a conflict driven in large part by Kremlin opposition to Ukraine’s European ambitions.

The war launched by Vladimir Putin on February 24 marks a major escalation in an eight-year campaign of Russian military aggression against Ukraine. One of the main factors behind the conflict is the Russian dictator’s concern over Ukrainian attempts to turn away from Moscow and integrate into the Euro-Atlantic community of nations.

Putin believes the emergence of a European Ukraine would spark similar demands for change within Russia itself and serve as a catalyst for the next stage of Russia’s slow but steady imperial decline. As the current invasion shows, he is ready to do anything to prevent the loss of Ukraine.

Ukrainians overwhelmingly support EU integration and expect good news from this week’s summit. At the same time, there are no illusions about the likelihood of a fast track to membership. The Atlantic Council asked a range of experts what they thought EU candidate status would mean for Ukraine.

Ukraine’s progress in integrating into the EU under the Association Agreement since 2014 gives it an excellent start as all aspects of the enlargement process are included in Ukraine’s existing commitments under the association agreement.

At the same time, significant challenges related to the rule of law and corruption remain. The five bodies of the anti-corruption ecosystem set up after the 2014 Dignity Revolution in Ukraine have demonstrated their ability to effectively target corruption, but they themselves have been targeted by older structures in the justice system, prosecutors and security services.

Ukrainian society is currently mobilizing enormous resources to resist Russian aggression. Hopefully EU candidate nation status would help civil society shape the political agenda, just as it did in 2014. Anti-corruption institutions remain institutionally intact despite the war but have been forced to reduce their activities. They must continue to work and receive the full support of the authorities.

As the Russian crisis in Eastern Europe escalates, UkraineAlert DAILY delivers the best expert advice from the Atlantic Council, the online publication UkraineAlert and beyond, to your inbox Monday through Friday.

Vitaly Sych, Chief Editor, NV press house: There are a number of reasons why official EU recognition of Ukraine’s European aspirations is extremely important at this time. The first reason is emotional. Ukrainians need encouraging news and a glimpse of hope in these painful times. EU candidate status would certainly qualify.

Second, it is a great chance to modernize the country. Joining the EU comes with a long list of conditions that will require Kyiv to make major progress in different areas, from judicial reform to individual freedoms and trade regulations. The government will come under enormous pressure from the Ukrainian media, civil society and Western partners to carry out these reforms. This can help Ukraine make rapid progress, just as the push for visa-free travel to the EU a few years ago led to dozens of reforms that might not have been implemented. implemented otherwise.

Candidate status would also bring financial benefits. This would send a strong signal to the world that Ukraine is an attractive investment opportunity with the potential for strong future growth.

Ultimately, gaining EU candidate status would represent an important step in Ukraine’s efforts to finally say goodbye to Soviet heritage and join the family of European nations. In the end, that is what the current war is all about.

Olena Halushka, Co-founder, International Center for Ukrainian Victory: Granting EU candidate status to Ukraine would be a powerful symbolic step that would also have tangible practical implications for the country.

Above all, candidate status would represent a well-deserved recognition of Ukraine’s reform progress since 2014. It would send a signal of support and boost the morale of Ukraine’s frontline defenders and those currently living in parts of the countries occupied by Russia. It would also send a strong message to Russian President Vladimir Putin that Ukraine is part of the EU family and will one day become a full member of the European Union.

Candidate status will bring with it a roadmap of reform that will serve as a powerful lever for civil society to maintain the momentum of Ukraine’s reform agenda. The list that has been proposed by the European Commission includes some important measures that are already priorities of my organisation, the Anti-Corruption Action Centre. This includes the reform of the High Council of Justice and the High Qualification Commission of Judges as well as the Constitutional Court of Ukraine.

Taras Kuzio, Researcher, Henry Jackson Society: By granting Ukraine EU candidate status, the EU can repel Russian aggression and the Kremlin’s longstanding opposition to Ukraine’s European integration. Russia began to oppose EU enlargement after the launch of the Eastern Partnership initiative in 2009. From then on, Russia began to view the EU in the same hostile way as she had traditionally considered NATO.

Basically, candidate status would take Ukraine out of the geopolitical gray zone between Eurasia and Europe. This would put Ukraine firmly on a European path away from Moscow and the proposed Eurasian Economic Union that Putin had sought to build around a core of Russia, Belarus and Ukraine.

Candidate status would both reflect the progress of reforms in Ukraine since 2014 and deserved recognition of Ukraine’s determination to defend its sovereignty and its European aspirations. Ukrainians first paid in blood for their European choice during the country’s Euromaidan revolution and are now doing so against Russian forces in what is the biggest European conflict since World War II.

Andy Hunder, President, American Chamber of Commerce in Ukraine: The message behind EU candidate status is clear: Ukraine is coming home. Ukraine is returning to the European family of nations whose values ​​it shares and is moving away from the yoke of Russia’s vicious grip.

EU candidate status will launch a new trajectory of GDP growth while massively boosting morale for post-war economic transformation and reform implementation. Such a decision sends a positive message to investors that Ukraine is moving in the right direction. There is no future for clean businesses in Russia. Instead, companies will see Ukraine as a prime destination for post-war investment.

If Ukraine obtains the status of an EU candidate nation, the country will undoubtedly make maximum efforts to carry out all the necessary reforms as soon as possible, such as the implementation of a reform real and effective judiciary, the rule of law, fair justice and the establishment of a level playing field. for the business community. We will see a comprehensive approach to creating a robust state and a competitive economy.

Oleksi Goncharenko, Ukrainian MP, European Solidarity Party: For Ukraine, the decision to grant EU candidate status would be much more than a mere technical formality. This would demonstrate that Europe is on Ukraine’s side and refuses to submit to Russian blackmail. This would represent the ultimate answer to the simple question of whether Ukraine has a future beyond the current devastating war.

Candidate status would also give an important new impetus to reforms in the country. This potential for driving reform is evident from the successful experience of other European countries that have already gone through the application phase for possible EU membership. Meanwhile, Ukraine could expect positive economic consequences from candidate status due to the gradual impact of reforms and increased investor confidence in the country’s future.

Peter Dickinson is editor of the Atlantic Council’s UkraineAlert service.

The opinions expressed in UkraineAlert are solely those of the authors and do not necessarily reflect the opinions of the Atlantic Council, its staff or its supporters.

The Eurasia Center mission is to strengthen transatlantic cooperation in promoting stability, democratic values ​​and prosperity in Eurasia, from Eastern Europe and Turkey in the West to the Caucasus, Russia and the Central Asia to the East.

Follow us on social networks
and support our work