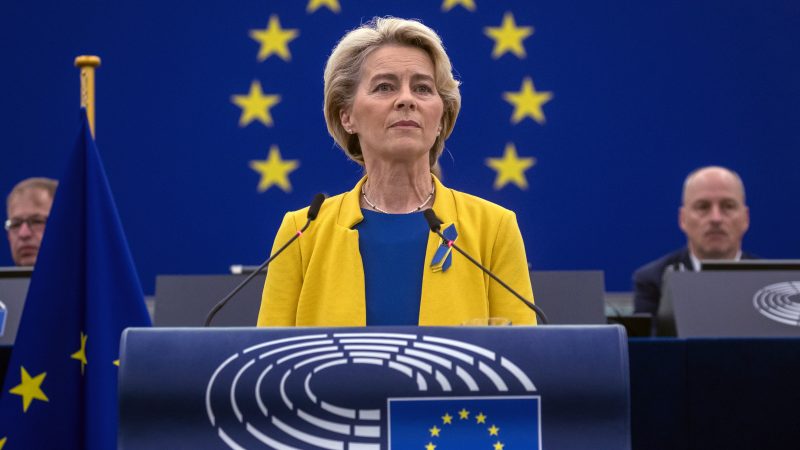 The President of the European Commission, Ursula von der Leyen, announced on Wednesday September 14 her intention to create a new “European Hydrogen Bank”. However, hydrogen is not an energy source but an energy sink, requiring large quantities of electricity to be produced, writes Jonas Helseth.

Jonas Helseth is director of the European office of the environmental NGO Bellona, ​​which promotes decarbonisation strategies for society.

The State of the EU address by European Commission President von der Leyen predictably and understandably followed the direction of recent EU policy towards Ukraine and the Russia and tackled the energy crisis, notably with long-awaited energy price cap plans.

However, a specific element of the President’s speech speech came as a surprise, not only to outsiders, but apparently also to many of his colleagues on the Commission: tthe announcement to “create a new European hydrogen bank”.

There have already been signs that this Commission has been easy prey for the hydrogen hype. A media hype that seems to have taken over its leadership.

We now see a shift from the originally cited reasons for promoting hydrogen in the first place: to provide a renewable alternative to fossil fuels; to support the EU Green Deal and deliver on the climate ambition of the Paris Agreement.

Hydrogen, a well-known energy vector, is increasingly presented as an energy source. It is therefore also a solution to the current crisis of energy supply in Europe. Hydrogen, however, is not a source of energy is an energy sink.

Its production (when not derived from natural gas, which we dare to hope few think it should be relied on), requires large amounts of electricity for electrolysis, an energy-intensive process to separate water into oxygen and hydrogen. For hydrogen to be renewable, all that electricity must obviously come from renewable energy sources.

Today, European grids are almost all deeply dependent on fossil fuelsso grid-connected and power-hungry chlorinators in most places increase both emissions and baseload electricity demand. Jit is the demand for non-variable sources such as coal, gas and nuclear energy.

This has long been dismissed by the hydrogen lobby as a necessary and temporary evil in the phase of scaling up a solution that our future economies need. Even if we were to ignore the climate emergency and the energy crisis, such arguments could only be accepted if plans for scaling up electrolysis were accompanied by (at least) scaling up. similar to renewable energy.

Without clear and transparent rules requiring such additionalitythe intensification of electrolysis in the EU will not only have short-term negative consequences, but cannibalize the whole Energiewende – our efforts to decarbonize our current demand for electricity.

Hydrogen hype, fueled by the Commission, has led various sectors to make announcements in the “hydrogen readiness” category; a term signifying a change in fuel to run on gas, with the option to switch to hydrogen once available on a large scale. Notably, this “hydrogen preparation” logic provided the twisted basis for label gas investments as “sustainable” under the EU taxonomy.

Particularly in the EU steel industrywe’ve seen a series of such announcements, the most recent this month by ThyssenKrupp. Last year, Tata Steel Netherlands did the same.

We made a case study, showing how eight wind farms the size of the largest in existence would be needed to decarbonize Tata in Ijmuiden. Sounds good, right? Except that there are no plans to build these additional wind farms. Large-scale grid-connected Dutch electrolysis will have to depend on coal and gas for a long time!

The EU steel industry finds itself in dire straits as it has been pressured to ‘go for hydrogen’. The plan was to run the steel mills on gas, until there was enough hydrogen available.

Meanwhile, gas is unaffordable, prompting The Commission will further relax its sustainability criteria for “green” hydrogento drive the scaling up of electrolysis for hydrogen supply.

The result? State-subsidized demand fueled by electrolysis on our already strained power grids. That means the rest of us, consumers and businesses, will pay even more for what’s left.

Where is the Commission’s impact assessment for this apparent folly?

This brings us back to basics: hydrogen is not a source of energy. Its production requires large amounts of energy. Energy that we don’t have now, hence the energy crisis.

When von der Leyen now announces 3 billion euros of taxpayers’ money “to help build the future hydrogen market”, it does not increase the production of renewable energy or reduce the demand for energy . This increases energy demand, costs and emissions.

The only way to end our dependence on gas is to use our renewable energy resources as efficiently as possible during the scale-up phase: direct electrification where possible is what makes the most money.

This obsessive and misguided insistence on hydrogen to replace Russian gas will prolong reliance on fossil fuels, throw the EU’s Green Deal under the bus, further drive up energy costs for consumers and businesses, and risk causing a new recession.

To make matters worse, it seems that the European Parliament is as lost in the hydrogen hype as the Commission. At the time of this writing, MEP Pieper’s amendment to Article 27.3 of the EU Renewable Energy Directive was approved.

The approved amendment proposes to launder renewable (“green”) hydrogen, with a massive negative climate impact until well after 2030 (!). Grid-connected electrolyzers not be required to operate with renewable energy. They will be allowed to run on fossil sources, but will still be considered and labeled as “renewable” in the EU, receiving subsidies.

The rationale is “flexibility,” to develop an industry that could lead us into a self-inflicted recession. As the societal price becomes evident, the political price is going to be at least as high.

Von der Leyen concluded his hydrogen bank announcement today by saying, “This is our green deal for Europe.” If this is true, Timmermans, vice president for climate, should resign without delay.